The Burlesque Underground is the Australian industry’s best kept dirty little secret. Approaching its tenth year running, with over 200 shows under its belt, the lovechild of Madame ‘Mama’ Natalia and a large portion of Australian performers and audiences is something of an enigma to many, an obsession to some, and a veritable cult to others. Now its about to launch a fabulous Burlesque Podcast!

From its humble beginnings as small Halloween shows at Melbourne’s Burlesque Bar and 24 Moons in 2011, to its current home at Wonderground Melbourne, the Underground has come in like a wrecking ball to some of the country’s most diverse theatrical hotspots – from burlesque and cabaret venues to fetish clubs, dance halls, cocktail bars, expos, zombie walks and even awards ceremonies and balls. And now, with the imminent release of its first dedicated podcast ‘The Underground Hour,’ it’s about to hit the world stage.

But what exactly is this Underground thing – this odd and slightly awkward cousin that no one talks about? We had a quick chat with creator and producer Mama Natalia ahead of the podcast’s 25th September launch, to find out.

Ok, so give it to us straight. What exactly is the Burlesque Underground?

Ahahahaaaa. It’s actually really hard to define it – but in simple terms it’s a live-action serial roleplaying cabaret and burlesque show based mostly on fetish, gorelesque and erotica. The cast play characters at every performance – before, during and after the show – and we carry on a soap opera storyline with each event, and between shows online via our blog and Facebook pages. Some of the story is improvised as we go, some is planned for safety reasons… and some is contributed by our groupies and audience members.

So has this storyline been going on for ten years?

Yep! I try to plan each year like a season, more or less… so you’ll have little themes corresponding to whatever event we’re putting on, like Halloween or Valentine’s Day etc, but then an over-arching storyline that carries the characters throughout the year. Kind of like Buffy or Angel – where you’ve got what’s going on in their everyday lives, then the Big Bad building momentum for a cliff-hanger finale. Thematically, it’s like a cross between the Godfather and the Addams Family. Or like a goth, fetish Muppet Show.

That’s huge. Has the cast been the same this whole time?

Yes and no. Ten years is a long time for anyone – especially in soap opera terms. When we started we had our core group – consisting of myself, Bella De Jac, Raven, Pippy Scream, Betty Blood, Jasper Jewel and Rowan Fortune. Along the way we added more characters – both through the contributions of guest performers like Reuben Krum, Peachey Dream, Adelaide Everheart and the amazing Lola the Vamp, and through the promotion of some of our most dedicated Undergroupies like Chastity De Vice [still the best name in burlesque – Ed], Luna Madness and Ophelia Black, who have since joined the cast and become performers themselves. People have come and gone… some have come back. Just when they thought they were out… we pulled them back in.

Does that mean that everyone who performs at the Underground has to create a character?

Only if they want to. Because we’re in character all evening it’s a great way for them to get involved and have fun with us, but it’s not necessary. A lot of performers will just come as ‘themselves’ and have a blast with us regardless. Some will eventually make up characters and fit themselves into the storyline so they can play recurring guest roles each time they join us. Others just want a place to perform their more ‘artsy’ pieces. When I started in burlesque way back in 2009, there weren’t a lot of regular work opportunities in Melbourne for performers who liked the “darker” or gothic themed arts, and with the Underground I wanted to create a space where ALL the acts and performances were of that nature every time – whether it was comedy or serious or psychological, horror, gorelesque or erotica… or just something weirdly abstract or political. You know… a place for the weirdos like me.

Your shows come with a lot of trigger warnings. Is there anything that we should be worried about?

Trigger warnings are an absolute necessity. While a lot of our acts are just dark comedy and/or more erotica and kink based, there are some that are deeply psychological and personal to our artists – performances based on trauma, mental and chronic illness, acts involving sharp objects, simulated violence, sexual violence and murder. The storyline itself is based on childhood trauma and the cycles of abuse – we have a bunch of characters displaying trauma responses and behaviours and perpetuating their own cycles. We have cast and crew with PTSD and trauma-based conditions that they channel into their characters, we have survivors of abuse and violence in our cast and our audiences and a large portion of both with mental and chronic conditions. Trigger warnings are how we keep everyone safe. We also have a ‘boundaries thread’ in our online group where everyone attending can list their personal, emotional and physical boundaries for each event. This way everyone knows, and everyone can help keep everyone else safe. It’s non-negotiable.

They’re our dedicated fans. Some of them have been with us since the beginning, others pop in and out as they can. They’re amazing – super supportive and encouraging. A few play characters in the storyline as well, others are content just coming along to watch the drama. We have groupies all over Australia who fly/drive hours to come see us every time. We’re so blessed.

Are audience members allowed to play characters as well?

Absolutely. There’s a vetting process, of course, to keep everyone safe and to try and avoid appropriation and insensitive caricatures and representation, but anyone can have a character approved once we’ve worked through the technicalities, and they can then play this character alongside us every time they attend an event. It’s how my co-producer Chastity De Vice and I met.

Tell us a bit about your character, Jasper Black.

Ha! That guy. I created Jasper because I wanted to stretch myself as a performer. He came about because after over 2000 shows as ‘Mama,’ singing and dancing in my underwear, I wanted to see if I could be as entertaining presenting as a masc character to counterbalance my femme persona. It’s been a bumpy ride – I had to unlearn a lot of toxic masculine behaviours and traits that were ingrained in me that I’d picked up from 17 years of bad relationships with men and society’s expectations of what a ‘man’ should be. Jasper has been an exercise in breaking down internal and external misogyny and reshaping the idea of what it means to be powerful in today’s society. I’m blessed to have a very strong and empowered female and non-binary cast that calls him on his bullshit – and isn’t afraid to ask the hard questions. He’s a been fabulous learning tool for a lot of our audience members about ‘what not to do,’ but also as an example of how even the most far gone of us can learn to change and grow if they really want to be better people.

What can we expect from the Underground Hour Burlesque Podcast?

We were lucky enough to get a grant from the City of Melbourne COVID 19 Arts Grants program and we wanted to create an online platform for our shows and events so we could start to reach a wider audience (and as a treat for our dedicated groupies and fans during “the most boring apocalypse ever”). The burlesque podcast takes us way back to the beginning of the Underground with a storyline segment that starts the soap opera from Season 1, as well as all the inside gossip and tidbits from the cast and crew about everything that was going on behind the scenes. Kind of like a ‘making-of’ documentary and a show all in one.

Will any of the original cast be joining you for the burlesque podcast?

Absolutely. We have many of the old guard kicking in – some have returned to voice their characters for the story and others are popping in for guest interviews and commentaries as we go. We even have a few of the characters themselves bouldering their way in to share their “opinions.”

I’m really looking forward to getting back onstage and continuing the saga. We have so many storylines and shows left… and that list only got longer with all this planning time! This coming year we’re dedicating ourselves to further diversifying our cast and creating opportunities for some of the newer burlesque performers and producers we see coming up the ranks…and I wanted to continue allowing opportunities for my own cast to write and/or direct some shows. The first season of the podcast is 15 episodes, and that’s not including all the online roleplaying and planning we will have to do once the current storyline kicks back in. It’s gonna be wild!

For more information on the Burlesque Underground and for performer enquiries, visit www.burlesqueunderground.com 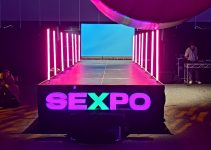 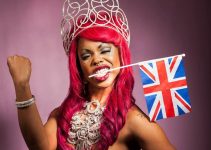 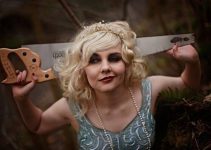