Our first columnist laments the appropriation of other acts’ music and opens a discussion: Does knowingly using elements of other people’s act act like a tribute, laziness or a Chuck Berry-savvy reality of the business?

Sometimes I feel like an old fart, burlesque-wise. I can still remember the good old days (2008) where you could rock up to a local gig in Ann Summers lingerie with ‘Feeling Good’ on a CD and no one would bat an eyelid. They thought it was awesome! If you used the Muse version of the song then you were downright edgy!

If I sound ridiculously small town saying all this, it’s because I am. I started Burlesque in a fairly-remote part of the UK, at least in terms of culture, and my points of reference were women (only a year or so older than me) rocking up in Ann Summers lingerie and dancing to Fever. I was pretty savvy back then, and worked out that if I wanted to stand out then I needed to do something different. Unlike those girls (who incidentally, are really great people and performers) I was not slim, conventionally beautiful or a trained dancer. Nonetheless, I persevered with Burlesque and found my niche, due in large part to my choice of 80s music for the majority of my early routines.

Fast forward eight years, and my Burlesque world is a lot larger. I teach my own students and spread the message that we should all strive to be a special snowflake onstage.

Except of course that this isn’t really true and it’s starting to wear thin. The reason? My Burlesque panties are riding up my butt with a righteous anger at people who use the same music as other dancers in their circle.

If you’re reading this and wondering, ‘Why the drama, bitch? I can use whatever music I want!’ I would be forced to admit that you are right. You can do whatever you want. You have a nice day now.

Ok, so now they’ve gone, let me break it down for you: using music that you know someone else uses is like buying the same dress as your buddy, then wearing it to the places you frequent together. You’re not breaking any laws, but when people notice they may have some questions about your moral code, safety around bunny rabbits etc. Even as I write this I know that it’s making almost zero difference to some of you. Maybe because you already know that you are indeed a very special snowflake with totally original music. Maybe it’s because you just don’t care. Or maybe you have already committed to this life of music sharing, and spent too much on the costume to change it now. But I also know that there are some people out there, some good and kind people, shuffling uncomfortably in their seat and thinking, ‘…ah….bugger…’

So what to do about it? It’s simple enough to say, “Do your research, look at what other people are performing to on YouTube, ask around your circle, hire a private investigator to background check your friends…” But it’s possible that even after all this you will still end up with an act that doesn’t feel personal anymore because someone 50 miles away uses the same music. And just to really put the boot in, has a similar costume as well. I know this to be true, I’ve seen it happen to friends, and I know it happened to me. I was there at the time. Furthermore, my personal feeling on the matter is that fifty miles is not far enough away to make excuses.

So what should we, as a responsible community of grown-ass adults, do about this increasing trend of apathy towards the musical rights of our fellow ecdysiasts? I’ve asked around within my circle, and against all expectations the offending parties tend to be more experienced performers. I suspect that this is due in part to a certain unwillingness to change well-worn behaviour patterns. I also suspect that they already know about their musical cross-over with another act and have chosen not to give a crap. That’s their call. I want to focus instead on our emerging performers, who want very much to be seen, respected and invited to perform. In the UK, newcomers have access to an unprecedented level of support, guidance and stage time thanks to social media, the Big Sister project, ever-increasing classes offered around the country and the now-commonplace newbie competitions taking place in London and other Burlesque festivals with established venues/producers.

The majority of newcomers I meet these days are tuned in to the guidelines that Burlesque and Cabaret stars pretend to follow (no way do most of us wash our costumes, we just say it so you don’t call us a dirtbag) and I’ve been pleasantly surprised at how inventive their choice of costumes and music are. They’ve cottoned on to the fact that an edited piece of music with multiple tracks and soundbites help separate them from the crowd. They’re paying attention to artists from adjacent performance practices like drag and circus, and are joyfully emulating their preparation and practice to deliver more polished acts that show off their ever-growing talent and skill. They are, truly, the special snowflakes of my Burlesque dreams.

So if, after reading this, you’re still content to rock up to gigs with generic costumes and a track you know other people also use, then all power to you. Just know this: the special snowflakes are coming for you… 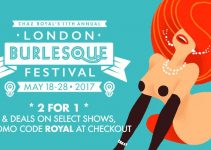