Burlesque Magazine editor-in-chief Chaz Royal catches up with Burlesque Superstar Dita von Teese to talk about her new highly anticipated tour ‘The Art of the Teese’, valuable advice for Burlesque career hopefuls, the future of the art form and much more…

BM: What is it like being Dita? What does a typical day look like when you are not performing?

Dita: Most mornings, I wake up and do my work out because it helps energize me for the day. At the moment, my days are filled with preparations for my February tour, things like working on the visuals for the tour poster, organizing the cast and run of show with my production team. I’ve been working with designer Jenny Packham on a new costume, and Christian Louboutin for new shoes for the tour,  new costumes for my Vontourage boys, plus new stage sets and props. Planning for a tour takes a lot of time. And in between, I’ve been traveling and performing private events, but whenever I can, I like to stay home and cook. I love spending the day at home, cooking and baking, especially now during the holidays. BM: In regards to your new tour, why roll out something other than Strip Strip Hooray?

Well, I wanted to make it clear that the show is different. We toured with Strip, Strip Hooray! for over five years, and I like the idea of keeping that same energy and feeling, but with lots new to see. This time, we are traveling to some of my favorite cities, like Chicago, New York, Boston, Dallas, Houston, Atlanta, DC… and some cities I’ve never brought the show to before, like Toronto, Grand Rapids and Detroit. It was important to me to bring the A-game show like we did with Strip Strip Hooray, but to breathe new life into the show with new acts. The Art of the Teese features some of my favorite burlesque stars doing new acts, along with some new performers that I’ve been admiring. I am always watching for new talent that is distinctive and unique. I’m performing new acts that I’ve never toured with that have never been seen in the US before, along with a new version of my martini glass act. As for the lineup, we have Mr. Showbiz Murray Hill back by popular demand, the show-stopping Dirty Martini, Jett Adore, Catherine D’lIsh, plus Ginger Valentine performing one of my own signature acts in her own way. I am excited to say that we will have Drag Race winner Violet Chachki joining the cast in Chicago and Texas!

I have one other performer to introduce but I can’t yet… but she’s incredible, I am very excited to have her join my touring family. Last but not least, I have my oh-so talented and super hot Vontourage, two incredible male dancers that back me up onstage. They’ve added whole new dimension to the show, I’m absolutely crazy about them!

BM: After all the years performing and being hailed as the ‘Queen of Burlesque’ is there any advice you can offer to anyone looking to make Burlesque a career?

Well, I feel very lucky to have gotten my start when I did, without the influence of seeing other burlesque acts…I had to form my own style based on what I thought burlesque could be, with my imagination, because I didn’t have the internet and other performers to reference. I think that the scene has grown to be so huge that it can be hard for new performers to find their own sense of self, so I would really suggest trying to look beyond burlesque as merely being vintage style and try to think of how to capture the spirit of burlesque, and at the same time evolve it to something new and… dare I say… modern, timeless. In my opinion, that’s the wave of the future.

My other advice is just to get as much stage experience as possible, not to be precious about performing. I have a lot of performing experience; when I was starting out, and for years afterwards, I would dance just about anywhere I had an audience! I never thought I would become famous for this, I just loved doing shows, whether it was in a dive bar or strip club or whatever. I just loved doing it, wherever I could, so it’s hard for me to relate to just doing it for accolades, or being fame-hungry. Recognition was all just an added bonus. Even now, I am doing this tour because I love it…I have to sell out every single show just to break even on the production costs, so it’s still not something I am doing to get rich from. I am sure if I quit traveling with my own stage curtains, lights, mechanical bulls and hired lesser-known performers and fewer crew members, I could turn a nice profit, but I can’t help it, I’ve always cared about the quality of the show above all.

BM: What was the defining moment in your early career that indicated worldwide stardom?

Oh, gosh, I don’t know, I mean…. I remember seeing a billboard in the 90’s that I was on in Wisconsin to advertise my show at a strip club and I thought that was IT, I thought I had arrived!  All along, since my start in 1992, I had moments that I celebrated as big breaks, but I guess looking back at this moment in time, I would say that being on the cover of Playboy was a big thing. It still had a cache because big name actresses and supermodels were still posing for Playboy then. Not long after then, I had a ten page pictorial in Vanity Fair and an article in US Vogue, and those things also made a big impact on my success. Being the first guest star in history at The Crazy Horse Paris and performing for Louis Vuitton at The Grand Palais in Paris were all onstage moments that put the spotlight on what I was doing too, but it took a decade of little burlesque shows and small press articles for me to get to the point where I was getting that kind of attention. I wasn’t an overnight success by any means, and it’s hard to say what the most important thing was. I think that diligence and being my own person rather than trying to be like someone else was the key to my success. No matter what anyone said, I just kept doing my thing, not really thinking much about the fame part of it, just working and being grateful. I never had any idea that my love of burlesque would someday be a legit career.

BM: A lot of the mainstream media has been focusing on the art from the past 20 years, what attributes to this?

I think that it is incredibly interesting that something that was really men’s entertainment in its’ golden age in the 1940’s and 50’s has become a new kind of feminism…my audience is predominantly female, and very fashion-forward, and with a big LGBTQ presence. Burlesque is very different in its’ modern reincarnation; for those that love it, it is playful and fun, a way to experience sensuality and glamour in a way that can inspire. BM: Any thoughts on the future of the art form and where you see yourself and Burlesque in the next 10 years?

I never think much about predicting the future because I’ve always been wrong. When I was 25 I was sure that I was at my pinnacle of my burlesque career, that I would be finished by age 30. I only ever think of doing my best in the moment, with integrity, and the belief that the quality of the actual work paves the way for future endeavors.  At some point, I’d love to find a protege, a gal that can wear my costumes and bring her own distinctive persona and style to my acts, with the graciousness and warmth of spirit that I think makes a great performer. What I’d love to do is build a show of performers doing all of my signature acts, their own way, within one big show! I’d like to sit back and see what all those Swarovski crystals look like under the stage lights once and for all! 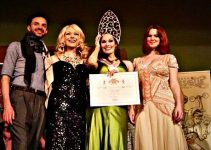