Burlesque megastar, Dita Von Teese, has made some of her classic performance art available on the SoClose platform. In an announcement that was sent out to subscribers of her app, she said she was offering pictures and videos that include a 1940’s themed bondage series. The announcement reads:

This vintage-style bondage serial is a one of a kind fetish series, shot on real film in the very early years of my career. It was originally only viewable on VHS, arriving to the purchaser’s door in a plain, unmarked package… and later I released it on DVD. Now, for the first time ever you can see all of it on SoClose! Now, there IS nudity in these films, so you MUST be 18 or over and have a sense of humor to view this vintage bondage masterpiece. And be sure to stay tuned for more of my early years’ work, which has been under wraps for decades until now! I hope you will join me on So Close! Fondly Yours, Dita

Content currently costs between $8 to $25 with the uncensored version of this article’s photo for free. You can find the SoClose platform by clicking here. 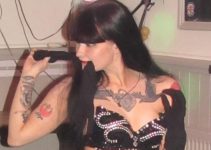