Dusty Summers, billed as “Las Vegas’ Only Nude Magician,” was a dancer, magician, and emcee for twenty-four years featuring in nightclubs and theatres across the U.S. and Canada.  She operated her own clubs in San Angelo, and Grand Prairie, Texas. Moving back to Las Vegas in 1991, she became a dealer and a pit boss at Circus Circus retiring in 2005.  Returning to the stage in 2006 for the first time in twenty-five years, she is recognized as a Legend of Burlesque by the industry. She recently was inducted into the Entertainers Hall of Fame in Las Vegas. Her most recent show Vegas Nocturne has been named by Las Vegas Weekly as one of the top 20 shows EVER in Las Vegas.
Burlesque Magazine editor-in-chief Chaz Royal catches up with the living legend that is Dusty Summers…
BM- When you realised you wanted to perform professionally, how important was it at that time to stand out amongst other performers?
DS- Billing and pay scale depended on my ability to stand out!  When I first began in burlesque I was known for my ability to shimmy and to twirl tassels.  I added magic to my show in about 1973 and became known variously as the Princess of Magic,  Only Wild West Magic Show in Burlesque and then finally,  Las Vegas’ Only Nude Magician.  Magic made me unique among burlesque performers.
BM- How was Dusty Summers ‘Born’? Professionally speaking… 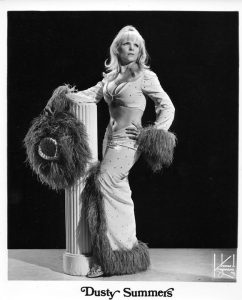 DS- I became known as Dusty in about 1966 when I worked in a a show that sought to revive burlesque in about 1966.  The choreographer was Chris Starr a burlesque artist in the 1940-1950s era and she named me Dusty after a record that was popular that year in Phoenix Arizona.  When the show closed, I added Starr to my name and was Dusty Starr but I heard a radio ad when I was appearing in Tucson Arizona at the Airport Inn and didn’t like the way starring Dusty Starr sounded, so I dropped Starr.  When I went to work at The Guys and Dolls in Phoenix, Arizona in about 1973, the owner said I had to have a last name.  Since Springfield was already taken, the best I could come up with was Summers!

BM- Did you ever expect that you would be able to travel the world, working and having the experiences you have?
DS- When I first started in Phoenix, Arizona, I was just happy to be on stage and loved the applause and the smiles.  As I improved, more opportunities came my way.  I was really delighted to be able to perform in Vegas Nocturne at The Cosmopolitan in 2013-2014.  I think it was as a direct result of performing in BHOF in 2013.  At my age, I never expected the best was yet to come!
BM- What was the best/worst thing that has happened on stage to you while performing?

DS- I was working with my husband Professor Turban and I could hear from the dressing room that his magic tricks and his jokes were getting lukewarm reception.  I didn’t even want to go on stage but of course I did.  I smiled.  I performed my strip and my magic and got a standing ovation!  Worst time?  I fell side ways off a stage that was about 3-4 feet high.  No one was sitting at the the side of the stage where I’d fallen.  It was nearly the end of the night and not many people in the club.  It didn’t seem to me that anyone was really paying me any attention so when I rose slowly back up over the edge of the stage, there they all were, staring at me and they started clapping when I got back up and finished my show. 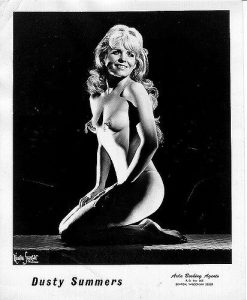 Photo by Maurice Seymour of Chicago

BM- What is the biggest misconception in Burlesque, past or present?
DS- I think newer burlesquers are maybe under the impression that the older generation burlesque was always glamorous.  However, most of us paid our dues working our share of dumps!  I have to say, though, that many of those dumps had the most enthusiastic audiences because they were blue collar working men and very appreciative. Most of the time there was only one performer in the smaller clubs.  Bigger clubs had 2 or more with breaks between the girls.  When I first started, it was mostly live music. Usually three shows a night of from ten to 15 minutes in length.  Later it was taped music with shows averaging 20 minutes each.  When it was live music, you could get away with only having one or two changes of wardrobe.  When it went to taped music, you needed to have a different costume and music for each show (3-6 per night) with the idea of holding the audience all night. DS- It is much more difficult to make a living in burlesque now due to all the instant ability of technology to access entertainment. You need to be at the top of your game.

Invest in exquisite wardrobe.  Better a few beautiful costume changes than a bunch of this and that.   If you get a good reaction from a show or part of a show, keep it in.  Do it again!  Several excellent shows even if they are the same genre are preferable to dozens of variety shows poorly executed.  If the show and the music are really good, you won’t get bored with it and neither will your audience.
Get professional photos.  Learn to promote yourself and any show you are in.  Promote other people’s shows too.  Adopt healthy habits such as staying out of the sun, no smoking or drugs.  Always look your best in public when on or off stage. I made the mistake once of going to an afternoon rehearsal with no make-up.  The club owner called my agent in a panic.  They were visibly relieved when I walked in that night with make-up, hair, and wearing a cocktail dress.
BM- Any closing statements or additional thoughts?
DS- Don’t get caught up in drama!  Don’t bad mouth performers.  Don’t give advice unless asked and then only sparingly and with positivity. Don’t seek your sense of value and worth through other people’s opinions.  The most ardent supporter is and should be you.  Believe in yourself.  Always smile!
To keep up with Dusty Summers see HERE
Share Tweet Pin it Share 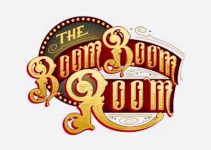 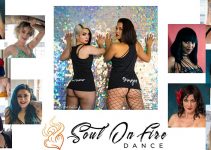 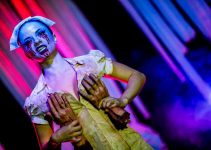